Pictures courtesy of Buzz Nau
We had a surprising turnout for the cold weather, but I think everyone that made it out had a good time.
Art started out the day with a 29mm CTI G57c to test out a prototype of a new onboard Hi-Def camera; hopefully those videos will be edited and released shortly. 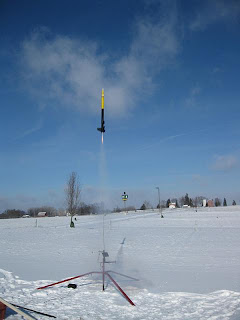 Carl decided to test out his new 3g CTI case with an I566V-max, the flight was beautiful until the hungry trees decided to help themselves. Hopefully it will descend some by next month then we Tony, Rob, and Scott can spend another few hours removing the liner J Dale decided to send up a dual deploy bird on an H120 Red Lightning motor, unfortunately the cold got the better of the 9v battery inside and it only had enough juice to fire the apogee charge before shutting off.  I’m guessing when the battery warms up it probably could turn back on and hopefully give Dale some data. 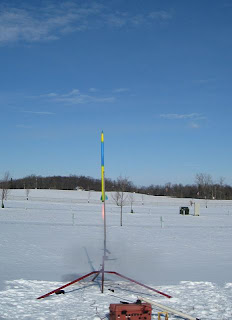 Chris brought out his new saucer with a minor modification; I believe it was loaded with an Aerotech D10 for a very successful flight; for now. 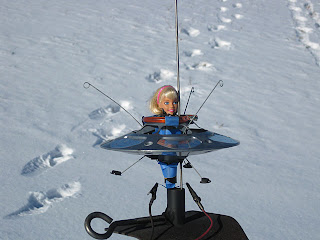 Tony had a 3 pack of the Aerotech D10 18mm motors that encouraged him to pushing some small kits to their limits. The first was joined the hungry rocket trees, the next model decided to shred a couple fins and separate the shock cord. I don’t believe Tony used the last motor in his Big Bertha, perhaps too much planning for other flights. Dale kept the day rolling with a G115wt in a LOC Warlock and almost landed it back on the pad. 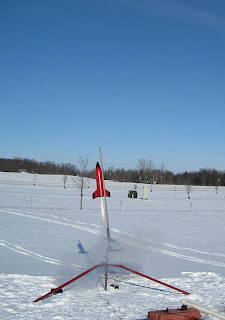 Tony and Chris decided to team up and fly a Dizzy Izzy and a Barbie saucer together CHAD staged. ony’s loaded with an EM G37 to Chris’s C6. 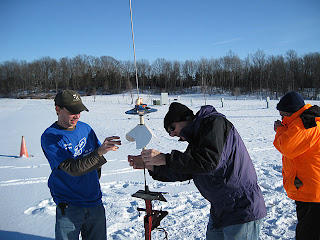 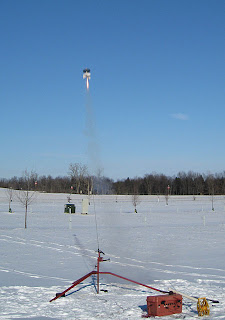 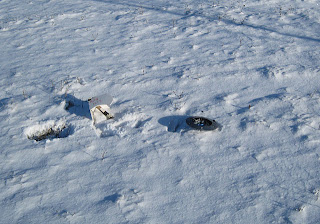 Surprisingly the model held together but the EM G37-6 had roughly a 15 second delay so the saucer did not light until landing… and sitting on the ground for a few seconds. So that meant to try again. The second flight was close to perfect for timing and the C6 light close to motor burn out, unfortunately Barbie did not comeback in the same condition… kudos to Barbie for being a good sport though! 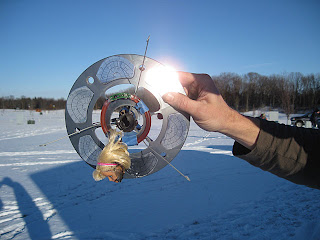 Dale had one more flight to hopefully crave his AP addiction for another month, an Aerotech Initiator on a Road Runner E25. This utilized hillbilly dual deployment for a perfect landing; you have to love it when plans work exactly as they are supposed to! 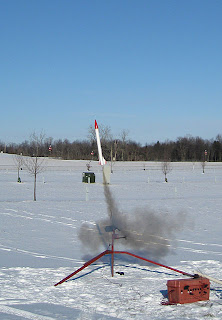 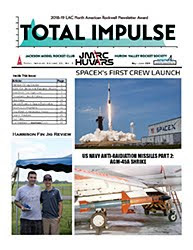